How Culinary School Helped These Chefs Realize Their Dream 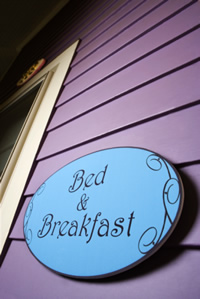 What would happen if you took your obsession with food and hosting and made it a way of life? With skills learned in culinary school, Lucia Osiecki and Deborah Jones turned their passion for treating guests to wonderful food in a beautiful and comfortable environment into a business.

The Love of Cooking and Hosting

When Osiecki and Jones met 30 years ago, they were both midwives, but each had a love of cooking and hosting friends and family. To make more room for this passion, they bought an old farmhouse in 1986, and fixed it up, adding a fifth bedroom so there'd be even more room to have family and friends come to stay--usually for several nights at a time. It gave them pleasure to cook delicious meals with produce from their garden, make the beds with line-dried sheets, and leave sweet-smelling soaps on the dresser.

The opportunity to tur n this passion into a career came 17 years later, when Osiecki and Jones entered a contest to win a bed and breakfast (B&B). They didn't win, but the idea stuck. "We knew we could do it," says Osiecki, "after almost two decades of running our own informal B&B."

While their 26 years as midwives gave them plenty of insight into working with people, prioritizing tasks, and putting in long hours, Osiecki and Jones felt there were some gaps in their knowledge, so they turned to formal training to fill in the holes.

To prepare for the demanding role of running a B&B, which requires owners to wear many hats, from chef to receptionist to groundskeeper to marketing director, Jones took some business classes, and Osiecki and Jones both became master gardeners and attended a three-day innkeeper's course. With those skills, it was time to focus on the cooking.

Both women loved making food, but wanted to broaden their horizons. In 1998, they started a ten-month professional chef program. In addition to basic baking and cooking lessons, they took classes in provincial Italian and French cuisine, wine, sanitation and food safety, and business. With additional training in menu planning and ordering, they were finally ready.

After delivering their last baby in 2002, Jones and Osiecki bought and renovated an existing B&B on a plateau above the charming arts town of Brattleboro, Vermont. With a close-up view of cows and a far off view of mountains, the Meadowlark Inn kitchen is now a harmonious mix of old farmhouse and up-to-code stainless steel. To honor their commitment to being green, they installed energy-efficient appliances, windows, and light bulbs. Osiecki and Jones also recycle, make compost, and still hang the sheets out to dry.

Osiecki and Jones managed to increase business 45 percent in the first year. There were no surprises for these two hard-working women, although the reality of running a round-the-clock business makes them "feel like [they're] always on." The co-owners say the stress is far outweighed by the joys of running a B&B, which include "getting to know repeat guests like family, being [their] own bosses, and being very connected to the community." They were recently voted best B&B in Brattleboro in the regional Valley Advocate newspaper.

If you ever find yourself at the Meadowlark Inn, expect to enjoy French toast with local blueberry sauce and maple syrup, handmade puff pastry and danish, and recipes like their house specialty--buckwheat crepes with spinach, ham, eggs over easy, and Gruyere. And don't forget to give their friendly springer-pointer Rhubie (short for Rhubarb) a pat.