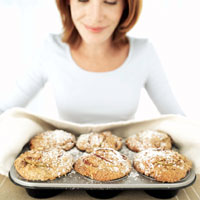 In October, 2010, the National Restaurant Association surveyed 1,527 American Culinary Federation (ACF) member chefs, asking them to rate 226 individual food items, beverages, cuisines and culinary themes as a "hot trend," "yesterday's news," or a "perennial favorite" on restaurant menus in 2011. The "gluten-free and food allergy-conscious" topic ranked at number eight in the survey, putting it with some of the most prominent trends in the nation for next year. Nearly eight in 10 ACF chefs agreed that it's a "hot trend."

Gluten is the protein in wheat, rye, barley, spelt, and a few other closely-related grains. It's not found in corn, rice, or oats, although oats are commonly contaminated during processing, so it's necessary to buy "certified gluten free" oats, meaning they were processed in a completely gluten-free environment. Gluten is hidden in many popular foods, including French fries, ice cream, bread, and pastries.

How Does Gluten Affect Baking?

Baked bread, the most common culprit, gets its elasticity from gluten, giving it the chewy texture when eaten. Gluten also keeps gases, released during fermentation, in the dough, enabling the bread to rise before being baked. And because gluten firms when it's cooked, it, along with starch, ensures that the bread or baked product maintains its proper shape. Gluten's absorbent quality allows various baked goods to soak up moisture, making them dense and rich.

The Reason for the Gluten-Free Craze

Gluten sensitivity or intolerance affects about .75 percent of the population, encompassing various medical conditions in which gluten has an adverse affect. Adverse reactions to gluten range in severity and can develop at any point in life. The symptomatic disease may appear years after the disease itself develops.

Chefs and consumers are finding that there is an alternative to gluten. More specifically, most gluten-free baking recipes include a varying combination of the following ingredients:

As the gluten-free trend gains momentum, more baking recipes are becoming available, all minus the gluten. For individuals with gluten sensitivity or intolerance, the following gluten-free dessert dishes (among many others) can be made:

As kitchens, restaurant menus, and recipes become increasingly more sophisticated and tailored to the individual, gluten-free menu items and ingredients are expected to become more prevalent. Savvy chefs and culinary students, alike, can expand their knowledge base with quality educational tools and baking classes that promulgate the gluten-free lifestyle among patrons.

Gluten-free is just getting started--let baking classes teach you all you need to know about this trend so you can make delicious baked good with or without gluten.