Why Buying Fresh and Local is Not Enough 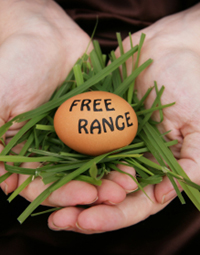 As the green movement enters the mainstream food industry, more customers are looking for choices that reflect higher levels of quality in their food. But for many diners, it's no longer enough to eat ingredients that are local, certified organic, and free from genetic modification, hormones, chemicals and antibiotics.

Now customers want meat, poultry, eggs, dairy and fish from animals that have been treated humanely--and not just for ethical reasons. They're beginning to link food safety, nutrition and flavor to animal welfare practices. In fact, a 2007 survey conducted for the American Humane Certified (AHC) found that 58 percent of consumers felt the labeling of animal products as humane was more important than organic or natural. But is the food industry ready to meet these standards?

Chefs Are On Board

The concept of cooking with humane food is not new to professional chefs. In 2007, Wolfgang Puck promised to serve only humane animal products in his restaurants. Some chefs say they prefer humanely raised meat because the animals haven't been sick or stressed during their lives, which can toughen the flesh and degrade the taste. Meat producers are also interested in potential benefits of raising humanely treated animals: a growing market and long-term productivity of the animals.

Price can be a concern for both chefs and producers of humane food, since it costs more to keep animals happy and healthy or to provide the space necessary for them to range freely. Some critics say that because consumers have gotten used to the low cost and poor quality of factory meat, convincing them to pay higher prices will be an uphill battle. But proponents of humane food have faith that as consumers make the connection between animal health and human health, they will be willing to pay higher prices. They also argue that as more people demand humane food, the market will adjust and prices will become more competitive.

To meet the need for rating and labeling humane food, several independent organizations have emerged. Created by the American Humane Association, the American Humane Certified (AHC) program is a farm animal welfare standards program that provides producers and consumers with independent verification of the ethical treatment of animals.

Similarly, Animal Welfare Approved (AWA) is a five-year-old division of the Animal Welfare Institute that certifies and promotes family farms. The Global Animal Partnership is an international group that also performs third-party audits and certifications for farms.

These rating systems are based on points for meeting certain criteria for raising animals humanely, including:

Similar to the process the food industry went through to create a reliable standard for organic products, there are still some bumps in the road when it comes to creating an industry-wide animal welfare standard that includes all species, provides a way for retailers to easily understand the rating system, and makes it simple for consumers to identify the labels.

Cruelty-Free Recipes Support the Cause

Chef Alex Seidel of Fruition restaurant in Denver--one of Food and Wine magazine's Top 10 Best New Chefs in 2010--recently served a holiday meal consisting of recipes made solely with ingredients from AHC producers to promote this new standard of animal welfare. Joining the trend, Whole Foods is one of three large food corporations that has agreed to raise their animal welfare standards.

Most chefs agree that what they serve has to taste good and be reasonably priced, but with the demand from customers and the support of animal welfare organizations, more and more are willing to take the risk of providing humanely treated products knowing it's better for animals, farms, customers and communities.