Home |
News & Articles |
In The Pantry |
Revisiting the Bell Pepper 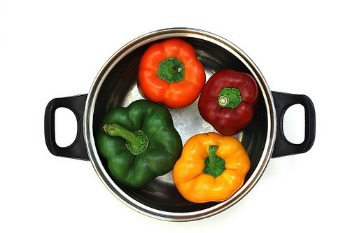 According to a report from the Economic Research Service (ERS), there has been a substantial increase in U.S. imports of fruits and vegetables, particularly bell peppers—the average consumption for an individual rose from 9.2 pounds in 2005 to 9.8 pounds in 2009. Furthermore, a 2011 report from the National Agricultural Statistics Service shows that California led the nation’s bell pepper production in 2010 with 7.7 million cwt. Florida was the runner up with 4.1 million cwt.

Bell peppers are in demand for their highly nutritional value and their relatively high tolerance for production in varying seasons. The taste ranges anywhere from sweet for the red pepper, to some bitterness for green and purple bell peppers. They are grown and are available year round, but the best crops are produced in the summer and autumn months.

Bell peppers are considered a staple ingredient, adding to various meals such as salads and stir fries. However, they do see a life beyond being the simple garnish and shine in the spotlight of some dishes; for example as stuffed peppers.

As bell peppers continue to mature and change color, the vitamin C content continues to rise with that of the sugar content – which explains the sweeter flavors in bright colored bell peppers.

For their size, bell peppers have tremendous nutritional value and provide great health benefits for the human body. They do not contain capsaicin – the spicy component in chili peppers. According to a DRI report, one medium-sized green bell pepper contains 177% of the RDA for vitamin C, which is necessary to maintain good cardiac and vascular health. The rich vitamin C content in bell peppers mixed with the carotenoids, or antioxidants, may help prevent cancer by destroying cancer cells.

Other important ingredients include vitamin A, lycopene, and lutein, which are necessary for eye health and prevent the formation of cataracts and other eye diseases. Sulfur and manganese are used by the body for growth and development of bones and aid in maintaining tissue health. The enzymes, cryptoxanthin and zeaxanthin, also found in bell peppers, are anti-inflammatory agents that, along with vitamin C and carotenoids, may help prevent cancer. All these nutrients are what make the bell pepper very beneficial to the maintenance of good health.

These juicy, crisp vegetables are also an excellent source of dietary fiber and retain the most nutritional value when eaten raw. If you are cooking the bell peppers, the best way to retain their vitamins and minerals is to cook at a low temperature for a short amount of time.

The Rainbow of Colors

Green bell peppers are the most popular of the various colors. It is harvested when it reaches maturity, but retains its green color. Bell peppers that stay on the plant longer start to turn brighter colors, as they go from yellow, to orange, and to red. You will also find some less common colors like purple or ivory. The purple pepper is actually in an unripe stage but can still be eaten – although it will turn red if left on the plant.

Next time you are out grocery shopping, be sure to include bell peppers on your list of ingredients and add these healthy and colorful veggies to your cooking.

About the Author
Sharon Hunter is the cooking enthusiast and food blogger behind StuffedBellPeppers.net. Check out his delicious stuffed bell pepper recipe collection at his site and on Facebook.