10 of the Tastiest Bagels in N. America | Chef2Chef.net

Home |
The Dish: Culinary Students Tell All |
10 Places Where You Gotta Get a Bagel

10 Places Where You Gotta Get a Bagel 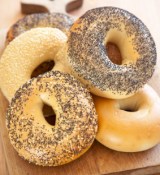 A truly good bagel can fill your belly, lift your spirits, and make you swear that there's more than flour, salt, water and yeast in the dough. Here are some places on the North American continent turning out unbelievable bagels. Have a look at these ten famous bagel spots (listed alphabetically). Set aside some time to make a special trip, or just enjoy reading their menus, tips on bagel care and legends about bagels.

These are some the most delicious bagels we could find, but you can look for other places to satisfy your craving for the perfect boiled bread. Explore your local bagel scene and discover what your hometown bakers are cooking up. You never know, the next great bagel maker might have just opened shop down the street.